Access your favorite topics in a personalized feed while you’re on the go.

Cesidio Di Ciacca’s first memory of visiting his ancestral village of I Ciacca, in Italy’s Abruzzo, Lazio, and Molise National Park, was when he was 9 years old and eating a fig he had just plucked from a tree. “I had never eaten a fig before, and it was just astonishing,” Di Ciacca told Insider. “But I also remember being surprised I was allowed to take it from someone else’s tree. But it was just the way it was — everybody shared what they had.”

This sense of community is what drove Di Ciacca, a former corporate lawyer, to return 60 years later to Italy from Scotland and bring the abandoned mountain village that lies between Rome and Naples back to life. The village started to empty in 1850 just before the unification of Italy, and that process continued. Many former residents settled in Scotland, as the Di Ciacca family did.

Di Ciacca’s daughter, Sofia Di Ciacca Tana, 33, remembers visiting relatives in a nearby village as a child and having difficulty reaching I Ciacca because it was so overgrown. “It has held such nostalgia for our family. It was talked about constantly around the table at Christmas in Scotland,” she said. “It almost had mythical properties for us.”

When Di Ciacca sold his law firm in 2010, it gave him both the finances and the time to finally take on a project. He bought a 1,000-year-old, four-story house in the village of Picinisco, which sits on the hillside above I Ciacca. After buying the home, Di Ciacca went on to own the entire village and run it as a business. Now his whole family is involved in growing grapes for wine and olives for olive oil, running the village’s hotel, and renting out space for events. Here’s how they bought and renovated the village.

Starting with a hotel

During the two-year renovation of the home, it became clear they had more space than they needed, so the family turned three-quarters of it into the six-bedroom Sotto Le Stelle hotel, which they run with the help of two local staff members. Rooms go for up to $255 a night.

While Di Ciacca was working on the hotel, he started thinking bigger. “One year into the renovation, I started to get itchy and look at how I could buy I Ciacca,” Di Ciacca said.

First, he had to persuade 140 owners to sell their 220 parcels of land to him. It took six months to track down the members from 11 families, who had emigrated across the world.

The generational properties differed in size, but whether they had 10 square yards — which was the smallest parcel — or more, he offered each owner the same. “We said your property is worth nothing, only sentimental value,” Di Ciacca said. “Here’s the price of a good field that has been worked next door. For some reason they all accepted.”

By 2013, they completed the sale. Di Ciacca bootstrapped the purchase with his savings and later received a grant from the European Union to help with renovations.

Building for the future

Di Ciacca and his family decided to make a vineyard their main focus, as they knew that if they could grow grapes, this could provide the roots for their future. In 2014, his daughter agreed to leave her job as an accountant at KPMG in Edinburgh to help run it.

“I could see the trajectory of what my life would be like in the corporate world,” Di Ciacca Tana said. ” I wanted something different. I wanted to live a life connected to my roots and that was building something for the future.”

Before they started to plan what to do with the rest of the village, the Italian architect whom they used for the hotel commissioned 3D surveys of the interior and exterior of the buildings so they could make sense of the jigsaw of stone buildings. They also had to do some groundwork to prepare for renovations, move pylons to add more electricity lines, and widen the narrow, hilly road so construction vehicles could pass.

For more than 500 years, the agricultural village was a place where families had passed knowledge from generation to generation. Di Ciacca’s wife, Selina Di Ciacca, suggested they make it a place of learning again. They made plans with a Scottish university to offer a master’s degree in gastronomy, but while the internal walls of a row of houses were removed to create a conference room, Brexit in December 2020 brought that to a halt, as the UK was no longer part of the EU.

“We’d already started building the conference room, so we had to finish,” Di Ciacca said.

The village went on to become a scattered hotel. One of the homes was turned into a two-bedroom apartment for guests, and the Di Ciacca family is planning to create 14 other bedrooms from four other buildings. On the other side of the village, they’ve turned a row of buildings into another conference room and other homes into a laboratory for honey production, a space for bottling, and a teaching kitchen. As they can’t change the footprint of the heritage buildings, they used three former homes to create the winery.

Blending old and new to create a modern home

The Di Ciacca’s used local artisans to create ironwork, copying motifs they found engraved in the 500-year-old stone walls, and they held on to the woodfired ovens in each property. Only one is still functional, which the chef uses to make pizza. To show visitors what the village was like in times gone by, they also created a museum, and one bedroom has been kept as a snapshot of what life was like before the village was abandoned. On the floor lies a 200-year-old carpet, and in a wardrobe they’ve placed cheesecloth tops and leather moccasins that were tied around the ankles, which the locals donated.

Sustainability was also prioritized. They installed solar panels to help with the heating, used water from a hidden stream, and installed a natural filtration system. With the guidance of their family friend Alberto Antonini, who’s one of the world’s top winemakers, Di Ciacca Tana and her team of four locals she found by word of mouth planted fava beans at the vineyard to enrich the soil. They followed the ancient technique of using copper to keep insects at bay and let animals graze in the fields so their manure fertilized the soil.

While their first planned harvest in 2016 was looking successful, they woke up one morning to find that half of their vines had been stripped of fruit by wild boar. The family then placed zoo-quality fencing deep into the soil around the property. They also received a grant from the national park to put fencing around their 40 beehives just in case the local Marsican brown bears were attracted by the honey.

In September and October, Di Ciacca Tana’s team of four locals plus a consultant technician grows to 30 with seasonal workers to help pick the wine grapes and the olives. The grapes are picked within one week, but the olive harvest can last a month. “We pick and press the olives on the same day,” Di Ciacca Tana said. “We start at 7 am, as there could be dew on the olives. Then we do a two-hour drive to an organic mill to press the olives and don’t finish until 2 in the morning.”

Four years after planting the vines, they harvested their first crop in 2017, and they now sell 25,000 bottles each year of their Decanter World Wine award-winning I Ciacca Nostalgia Maturano and I Ciacca Matrimonio Maturano wine, priced up to $36 a bottle internationally. At Ciacca Tana’s husband, who’s a wine distributor, also helps export their wine. The 1,200 olive bushes matured even faster, and they now sell 2,000 bottles of the extra virgin olive oil on line from $24 annually.

Not only do the Di Ciaccas offer tours to visitors — often led by Giovanni Di Ciacca, Di Ciacca’s son — but since they completed the conference room-turned-event space in 2021, they’ve attracted bookings for olive oil conferences, a gathering for cyclists, and corporate events as far away as the UK, Australia, and the US. The property is available to book for weddings, but the only wedding they’ve hosted so far was for Sofia Di Ciacca Tana and her husband.

The family splits their time between Scotland and Italy, and since moving to the area they’ve seen more people embrace the slow life, whether that’s zero-distance restaurants, where ingredients are sourced locally, or young people returning to their family’s farm to produce artisanal ingredients or run it as a bed and breakfast.

The Di Ciacca family also have more plans afoot. They intend to continue to extend the guest accommodation in the village and create a farming academy and a cooking school. “The buildings had died,” Di Ciacca said, “but the heart of I Ciacca didn’t stop beating.”

Correction: October 24, 2022 — An earlier version of this story misstated the Italian architect who commissioned a 3D survey of the interior and exterior of the buildings. It was another architect, not Assunta D’Andri.

Alaska Air Group (NYSE:ALK) Might Be Having Difficulty Using Its Capital Effectively

Mon Oct 31 , 2022
Finding a business enterprise that has the probable to expand substantially is not quick, but it is attainable if we appear at a number of essential fiscal metrics. In a great globe, we’d like to see a enterprise investing far more capital into its enterprise and ideally the returns gained […] 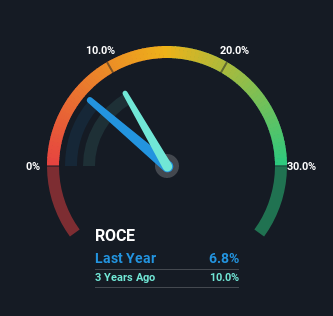