When customers began showing up at his house all hours of the day and night wanting to order shirts to be printed, Travis Alexander knew he had to do something.

His home-based business, Shirt Mayne, needed a home of its own.

Turns out he did not have to go far. He found a space in the Northgate Mall, not far from his home, where he and his wife, Marinthia, could open, which they did in November. Business was good enough to allow him to quit his day job as a land surveyor.

The location has worked out so well for his business that “they’re going to have to run me from the north side,” Alexander said. His business, he said, brings customers into the mall. A typical day is about five or six orders, but it’s not unusual to get as high as 50-60 orders in a week during busy times of the year.

“I’m happy right here, man,” Alexander said. “There’s so much potential on this side. People don’t give it a chance enough to succeed. They just need to bring more things to this side. If you pass on the south side at any given time, you see construction and you see growth. We have to choose to do it on this side.”

Running a business on Lafayette’s north side is more challenging than any other part of Lafayette. The Lafayette Economic Development Authority last week released its plans and recommendations for economic revitalization of north Lafayette, an area that has seen decades of retail disinvestment and has the lowest median income levels in the city.

LEDA’s report was in response to a resolution authored by Sen. Gerald Boudreaux, D-Lafayette, in the most recent legislative session that urged the agency to develop a comprehensive economic development strategic plan for the city’s north side.

Boudreaux expressed his frustration in the resolution. He cited the fact that LEDA is funded by a parishwide property tax that was never approved by voters and does not require a vote of the public. He also noted that at the end of 2019 the agency “had a $16 million net position.”

The north Lafayette lawmaker said he was pleased with the agency’s response.

“I wanted more from our economic development authority,” Boudreaux said. “There have been a lot of businesses that have moved out, and we have not been able to recruit businesses. I wanted the authority to accept the accountability, and that’s why I asked for this report. I wanted LEDA to step up on behalf of the north side of Lafayette and tell us, ‘What is it you need to make this part of our community thrive like other parts, like Broussard and Youngsville?’”

Has LEDA not given the north side of Lafayette the emphasis necessary for it to thrive? The agency in its report indicated it has invested more resources in north Lafayette and downtown than any other part of the parish. It highlighted work ranging from the large employers moving into the North Lafayette Industrial Park along West Pont des Mouton Road to a large mixed-use development that could open near the Louisiana Avenue exit on Interstate 10.

Some challenges facing the area are out of the agency’s direct jurisdiction, including affordable housing and community development.

When asked if the agency has historically slighted the north side of Lafayette, president and CEO Mandi Mitchell, who was hired last fall, said she is looking ahead.

“I can’t and won’t speak of the past,” Mitchell said. “I’m focused on the future. I’m going to join forces with elected officials, community leaders and other institutions to make sure we move Lafayette forward. I’m not going to dwell on the past.”

The report is a start, and LEDA indicated it will conduct further studies with city leaders, legislators, partner organizations and north Lafayette community leaders.

Cities across the country have addressed neglected areas with revitalization efforts, but unlike many of those cities, the neglected areas of Lafayette are at the entrances of the city. It’s the gateways, people often say.

You can’t get to the south side of Lafayette without first going through the north side.

“Economic and community development is a long game,” Mitchell said. “It really does take time, but I’m in it for the long haul. I’m from north Lafayette, and my mother still lives there. I’m there several times a week. I want to see some improvement.”

In an ever-evolving business landscape, you need trusted information from a reliable source to help you make decisions. We provide that — daily data, analysis and insights from local experts.

Retailers often yield to an area’s median income level in determining whether or not to locate in an area, and the north side has not fared well in that category. On the surface, the report indicated, it’s the biggest limitation to development in that area.

Raising the median income level, Mitchell said, is only part of the solution. The end goal is to make north Lafayette a desirable place to live, one where high school graduates want to stay or return to live.

There are lots of things that can be done in that area, longtime Lafayette attorney Clyde Simien said. An easy one would be opening an urgent care clinic. Currently the closest urgent care for anyone living east of the Thruway might be the clinic near J Wallace James Elementary School, but you can find about a half dozen along Ambassador Caffery Parkway.

“There’s no question (the north side) has not gotten full attention from LEDA, in my opinion,” Simien said. “We’re hoping with this new president that we’ll see different results. If they really want to make a difference and have something done, there are opportunities and projects that can start immediately.”

Housing issues, too, are becoming a serious issue for residents, many of whom are renters and are facing higher rents as the result of inflation and rising real estate prices. Less than half of all homes in north Lafayette are owner-occupied, compared to 60{3e92bdb61ecc35f2999ee2a63f1e687c788772421b16b0136989bbb6b4e89b73} parishwide.

Efforts need to be made to secure affordable housing, including locating units in Opportunity Zones, the report indicated.

“If something doesn’t shift in our community, there’s going to be severe displacement on the north side,” Shelvin-Bingham said. “We need housing, and we need businesses. As businesses grow and more industry comes to the north side, those employees are going to need a place to live. Those are opportunities that can be provided here in our community. We don’t have a sufficient housing stock.”

What can be done

It’s that gateway thing that people keep pointing back to. LEDA has long recommended establishing overlay districts at those areas to stimulate business growth.

While north Lafayette is home to the intersection of I-10 and Interstate 49, the uncertainty of the I-49 connector has been the biggest hindrance in attracting businesses there, the report indicated. Service roads, which have been useful tools for recruiting businesses in Scott and in areas along I-49, would be transformational.

“It’s the gateway to Lafayette and it’s the worst part of this community,” Boudreaux said. “If I saw that, I would get back on the interstate and go to the next town. That was part of my frustration — how do we change this? I was tired of accepting the fact that, well, that’s just the north side. No, I’m not accepting that.”

LEDA indicated it will also advocate for equitable education and workforce training opportunities for north side residents in partnership with South Louisiana Community College, the Louisiana Workforce Commission and the W.D. & Mary Baker Smith Career Center with the Lafayette Parish School System.

Among LEDA’s other plans include a new small business development center for north Lafayette to provide services to entrepreneurs and small businesses. Staff at its Opportunity Machine, the entrepreneur center that recently opened downtown, in 2020 hosted a seven-week a small business boot camp that 57 people attended virtually.

There has been similar results with the Accelerate Northside programs put on by the Louisiana Entrepreneurship and Economic Development Center and other agencies. Each of the three sessions had a larger number of participants, including 54 in the last one, LEED Center director Geoff Stewart said.

There’s a strong entrepreneurial spirit among people in north Lafayette, he said. Participants, many of which have been women, have banded together to help each other. Jermela Haynes, a participant who has opened the Sweet Envie bakery on Moss Street, recently hosted a pop-up shop for other budding business owners outside the bakery.

It’s those budding entrepreneurs that can spur an economy over the long term, he said.

“One of the things that I’ve heard people say is, individually, you’ve just to take a step forward and move,” Stewart said. “If we don’t tell the story of the north side of Lafayette, then nobody else will. This is a major, major strategic asset of who we are as a city and as a region.”

Sat Jul 23 , 2022
‘WSJ at Large’ host suggests a plan to tax some high-income earners is an additional indication of how out of touch the Democratic Occasion has become on ‘Cavuto: Coast to Coastline.’ Exclusive: Sen. Rand Paul, R-Ky., is out with a new report displaying the Democrats’ proposed tax hike on go-as […] 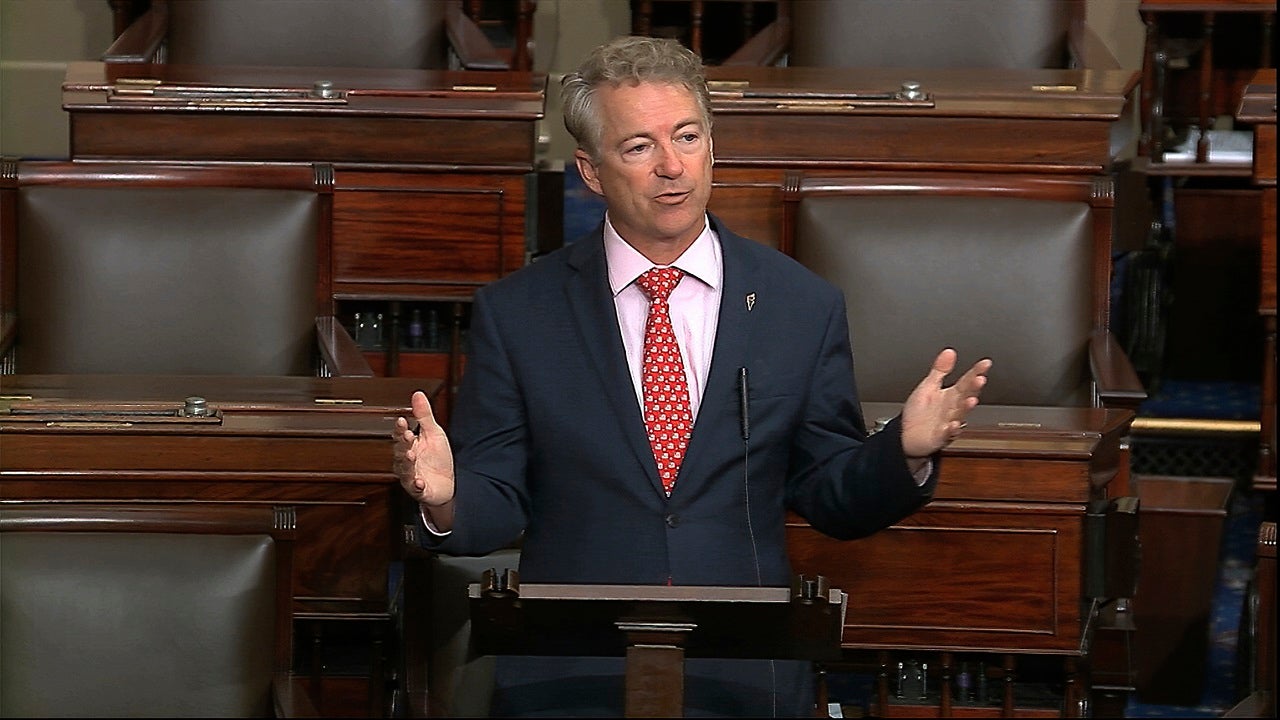