As part of our “Returning Home” radio series, Eric Douglas spoke with Crystal Mersh about her return to Calhoun County.

Mersh is the CEO of Quality Executive Partners, a consulting firm that provides expert support in the pharmaceutical, biotechnology, advanced therapy and medical device fields.

In October, Mersh and others from the community announced the 1982 Foundation to restore the old Calhoun County High School in Grantsville as a community center and business incubator. To make that happen, Mersh has moved back to West Virginia from Atlanta.

Douglas spoke with Mersh from a local pharmacy in Calhoun County because it was where she had to go to find a reliable internet connection.

Douglas: You’ve decided to move back to West Virginia. Why?

Mersh: I guess I would say West Virginia has always been home. So no matter where I’ve lived, and I’ve lived all over the U.S., and I’ve also lived in Europe, when I use the word home, it’s referring to West Virginia.

I never really considered that there would be a legitimate option for me to move back home until we experienced the pandemic. And through that experience, it became very clear that you can work anywhere and live where you want and have all of the necessities that you need.

Douglas: It sounds like you left pretty much right after you graduated high school.

Mersh: I did. I got married seven days after I graduated high school to a Marine and we moved to where he was stationed.

Douglas: What’s different? What’s the same? What’s your impression, now that you’re back?

Mersh: A lot has changed in Calhoun County, and some of it is not in the spirit of progress. I think economically the county has struggled. It also struggled with the drug epidemic. Sometime in 1998 or 1999, the high school was moved from Grantsville, about eight miles away, to make it more central to the county. But at least part of the fallout of that has been that we’ve lost some of the economic viability of the county seat. Because everything revolved around the high school.

Douglas: You’re making significant personal investments, but also community investments, and really trying to drive your hometown community forward again. Why? Why was that important to you?

Mersh: It’s something I’ve been thinking about for some time about how to give back because, for better or worse, I’m a product of this community. And I felt that folks invested in me many years ago, and they didn’t have to, they didn’t need to, they weren’t paid to. And they did it. And I feel that the kids today really deserve similar support. If they then choose to stay here, they would find options. And we would help them create options to do that. If they choose to leave and spread their wings and see part of the world and then decide to come back. That’s great, too.

Douglas: When you’re talking to some of your peers, what’s your message to people about moving to West Virginia? What’s your sales pitch?

Mersh: Really just opening up the dialogue and helping them see that there is indeed a viable path to this. That’s all you have to do. They want to know how they maintain their level of income? Does that mean they need to have a job here locally, or can they do remote work? How does that work? And, you know, quality of housing is an issue. And that’s about it.

Douglas: You’re also involved in a project with the Chamber of Commerce. They came to you to actually bring people back to West Virginia. Tell me a little bit about that.

Mersh: Yes, it was an idea that came up in the West Virginia Economic Business Summit that was held in the Greenbrier earlier this fall. I asked the question “What are you doing to attract other people like me?” When that came out of my mouth both the president of the Chamber of Commerce and the director were making a beeline to me to talk about that, like I had a plan, which I didn’t.

I was just saying this would make sense, because you’ve got people who’ve gone away, who have a love for this state, and always will have, and who started businesses and they can relocate those businesses anywhere. So why not entice them to come back. And because in addition to me coming back, I’m also bringing my business with me. We’re talking with the state economic development group about relocating here. It looks very, very promising and will likely locate a $100 million business into West Virginia. So that’s how that concept came about. Let’s reach out to the folks who have a heart for this state and can live anywhere.

Generally, it doesn’t take too much enticement for folks to really give it some serious thought. So we want to do that. We’re going to start that here in Calhoun and then we also want to have a program that’s focused on high school seniors and those going into college that opens up their eyes to entrepreneurial ventures and probably will be a combination of a work study program for them in college to provide avenues to keep them home.

Govt. school students get chance to scale up their business ideas

Tue Dec 7 , 2021
From starting off with seed money of ₹2,000 to being grilled by investors on the feasibility of a business plan, students of Delhi Government schools under the Entrepreneurship Mindset Curriculum (EMC) have been given an opportunity to enhance their ideas. They can change a school project to something that creates […] 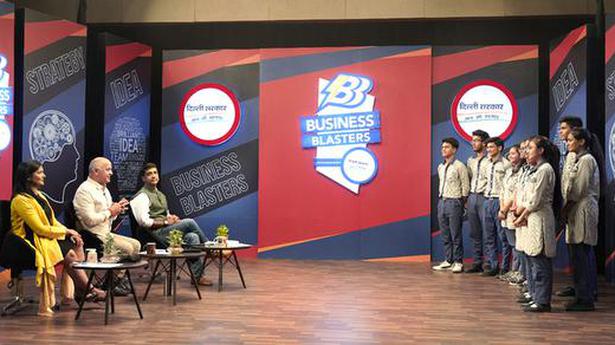